Legislative Assembly of Tonga’s Standing Committee on Environment and Climate Change – Climate Change and Disaster Risk Management continue to be the year’s agenda.

The Legislative Assembly of Tonga’s Standing Committee on Environment and Climate Change continues to share an increasing concern for Tonga’s vulnerability towards climate change and its impacts on the livelihoods of people.

Following Tropical Cyclone Ian on January 11th 2014, these issues continue to be at the forefront. Members of the Committee have visited Ha’apai since, including the Chair of the Committee, Semisi Sika, Lord Fakafanua (Lord Speaker of the House), Lord Vaea (also Minister of Internal Affairs) and Hon. Fe’aomoeata Vakata (also Minister of Public Enterprises). These visits have influenced the Standing Committee’s agenda for the year particularly on the level of preparedness for natural disasters.

On Monday March 3rd, an Annual Briefing Session for Members of Parliament was held at the Fa’onelua Convention Centre. The one-day briefing session was supported through the UNDP’s ‘Tonga Governance Strengthening Project’, with the objective of informing Members of Parliament on current affairs in Tonga, covering a variety of topics including Disaster Risk Management (DRM). DRM is a priority issue for the Standing Committee.

To address Disaster Risk Management, Mr. Leveni ‘Aho (Director of the National Emergency Management Organization) shared NEMO’s emergency response and updates on the status in Ha’apai following Tropical Cyclone Ian’s impact. Members noted the efforts so far and recognized the need for continued resilience training programs for the public so that they are safer and better prepared for future like-disasters.

Hon. Semisi Sika, Chair of the Standing Committee states, “Our Committee and all MPs need to be updated on these issues and presented with options so that we, as parliamentarians, are able to make the best decisions for our communities. For example, today we were advised that there are other innovative options to address coastal erosion other than just sea walls, which are currently being trialed by the Ministry of Environment and Climate Change in Tongatapu’s eastern side”.

Lord Vaea, a member of the Standing Committee, highlighted Ha’apai’s vulnerability to the impacts to climate change, “Ha'apai has experienced drastic climate change, exceptionally high tides, diluted spring water, receding foreshores and heavily migrating population. As I grow older my faded faith and accumulated past foretells a tragic future. Keep the globe turning and the sun shining for life has changed into a partnership between human beings and a delicate eco system”.

This year, the Standing Committee anticipates playing a key role in highlighting environmental and climate change issues and in promoting its public awareness. It also looks forward to working closely with environmental stakeholders from both the public and private sectors in order to promote more environmentally friendly solutions for a greener and more climate-resilient Tonga.

With this press release are photos taken in Ha’apai during a short visit by the Chair of the Committee, Hon. Semisi Sika and Lord Fakafanua, photos from the Annual Briefing Session and videos captured by Lord Vaea on March 8th 2014 in Pangai, Ha’ano and Tongoleleka. The videos illustrate nature’s wrath and the horrendous devastation that cyclone Ian left behind along Lifuka's south western coastline. 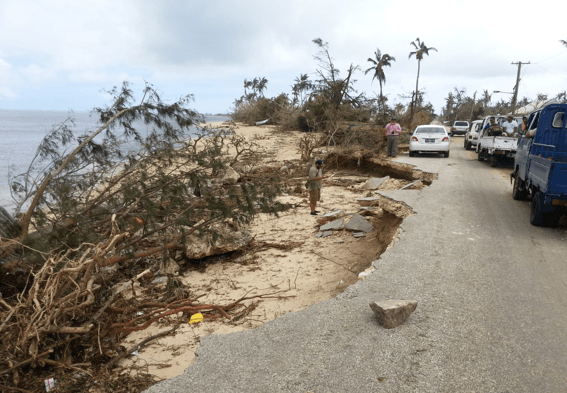 Above:Lord Fakafanua (Member of the Standing Committee) inspects damages and erosion to the roads, Ha’apai, January 13, 2014) 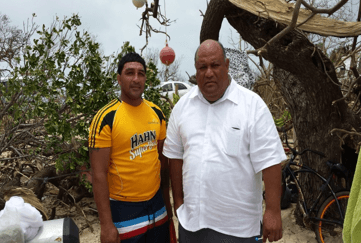 Above:Semisi Sika with one of the victims in Ha’apai who lost his home during TC Ian. Picture taken on January 13, 2014.