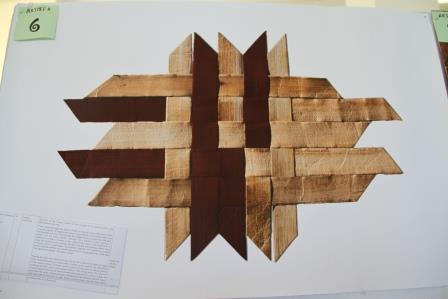 Walter Holakeituai’s art piece “Fatu” depicts the structure of the Tongan culture in the progress of its transformation and development over time.

In explaining his art piece, Holakeituai said “fatu” portrays the Tongan culture in three eras, the past, present and the future.

“It uses weaving; a traditional art that is common in the culture mostly seen in the production of mats.”

Holakeituai said the decision to use weaving came from the idea that weaving reflects mats; it brings a sense of exchanged conversations “talanoa” as it represents a place where meetings whether by a family, community or a large gathering is held, like the Legislative Assembly “Fale Alea ‘o Tonga.”

The center which is signified by maroon fibers illustrates Tonga’s present. It shows western culture combined with the native culture (brown fibers).

The NZ Unitech student said on top of his art piece shows the future of Tonga culture which was made of a fusion of both native and western culture.

“This shows the native culture has been influenced by the western culture and have inherited some of it as part of the current culture and will likely continue to do so in the future,” according to Holakeituai.

In the open category award which was judged by the public, Tevita Pola’apau took first prize, followed by Talanoa Langi of Kolofo’ou. Second runner up was John Piutau with Walter Holakeituai’s art piece in fourth place.

Second to fourth prizes include mobile phones worth TOP$600, $400 and TOP$300 respectively under the auspices of the Tonga Communication Corporation (TCC).

Their art work did really impress the Speaker’s art panel of judges.

‘Ilisapesi Fonua’s art piece depicts that although it is impossible to predict the future, the Tongan culture and traditions should be preserved.

Lu’isa Fonua’s art work portrays a Tongan Parliament today and tomorrow where it metaphorically represents an unrolled mat for nobility and the people to assemble and consult as equals.

On the other hand local practicing artist Tevita Latu features his art work on influences of western ideas in different sectors of our society including religion, education and politics.

More than 60 art works were submitted from local artists for the Speaker’s art competition.