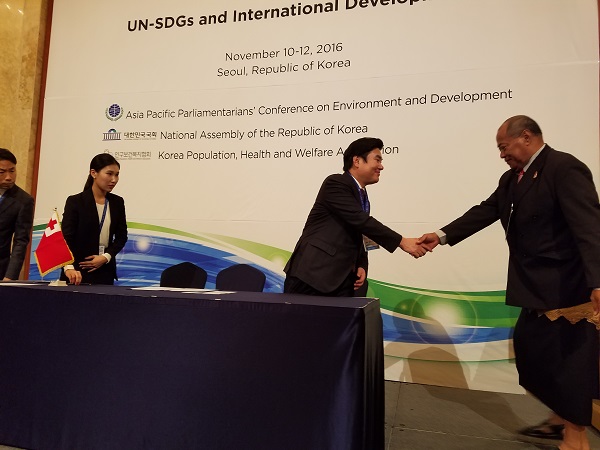 The challenges faced with regards to conservation in the country are very similar to those faced by many Pacific Island countries.

The many and significant pressures and threats impacting Tonga’s biodiversity have undoubtedly had a serious impact on many terrestrial, freshwater and marine ecosystems and species.

Vava’u 15 MP of the Legislative Assembly of Tonga Hon. Samiu Vaipulu revealed this when delivering a country environment report on Tonga while attending the 18th General Assembly of the Asia Pacific Parliamentarians Conference which began in the Republic of Korea yesterday.

Hon. Vaipulu says the direct effects of climate change and their interactions with the current threats will only exacerbate the risks to biodiversity.

These pressures work singly or in tandem with each other in complex ways, and the actual magnitude of each pressure varies from country to country.

Therefore there is an urgent need to take stock of the current state of the natural systems and resources of Tonga, so the greatest risks can be identified and
mitigation and recovery actions developed. ,” explained Hon. Vaipulu.

On conservation efforts, Hon. Vaipulu adds Tonga is committed to protect 20 percent terrestrial and 30 percent marine within our Exclusive Economic Zone (EEZ) by 2020.

To date, Tonga have managed to meet the 30 percent target for marine managed areas; and are still working towards meeting the 20 percent terrestrial.

Tonga’s plan of action for biodiversity conservation are outlined in our National Biodiversity Strategy and Action Plan, also known as the NBSAP. It was developed in 2006, and it is currently being revised to integrate the Aichi Targets and SDGs, with synergies to the RIO Conventions, and the biodiversity related Conventions.

Across the ACP countries there are over 700 formally recognized Protected Areas – Covering 2.25 million square kilometres. Naturally these are mainly marine areas, but there are also many significant terrestrial protected areas and many are a combination of both land and sea.

Hon. Vaipulu also spoke about the special distinctive about the Pacific Islands region is that the majority of lands, freshwaters, tidal areas and inshore coastal waters are customarily owned, governed and managed by local communities that use traditional resource use practices.

So in many cases he added they have the overriding say in management or are at the very least essential stakeholders where national governments are moving ahead on protected area initiatives.

At the community level, protected areas are essential for sustaining food and water sources, culture and wellbeing.

“Protecting conservation values can also be an important outcome, but is often secondary to the importance of community livelihoods,” said Hon. Vaipulu

In Tonga, resources management is a fundamental principle in designing, establishing and managing protected areas– at community level and also in terms of the multiple government ministries that overlap in their shared responsibility for these areas.