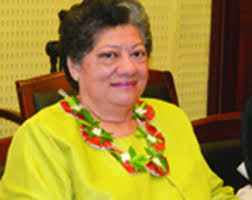 THE mindset and culture around election campaigning and entering into politics needs to be changed so voters understand when a candidate is elected into Parliament, it is not about paying their bills.

Former Minister of Justice and Attorney General, ‘Alisi Taumoepeau made the remarks when spoke to 30 members of the first ever Practice Parliament for Women in Tonga during their orientation programme at Fa’onelua Convention Centre yesterday.

‘Alisi told participants that running for Parliament is not paying voters’ bills, instead it is about skills, finess and passion to carry out their parliamentary duty to the people of Tonga.

During her campaign in the last general election, ‘Alisi said she used media a lot in her campaign which was costly since it is a powerful tool in educating and informing people. The other strategy she adopted was talking to people in her electorates.

“Going from doors to doors of those I knew they were registered voters in my constituency. I preached to them about the rule of law and integrity. These are issues that are far reaching from the community’s mind. After speaking with them on my campaign message and slogan, one lady asked “if she votes for me, would I fill up her empty cooking gas bottle,” said the former MP.

In reply, ‘Alisi said it is not the responsibility of parliamentarian to pay voter’s bills such concerts, church financial offering (misinale) and all. On that note she said the media, teachers and educators need to enlighten and change the mindset of Tongans around election campaign.

“Running for Parliament is not about donating large sums of money in community concerts and for different fund raising drives. No! It is all about skills, finess and passion to carry out your parliamentary duties and responsibilities effectively.

For those of you who are brave enough to be vying to become political leaders, can we take it to the people that it is all about skills, finess and passion…it is not about paying voters bills,” the former Justice Minister reminded participants.

She also mentioned that vying for seats in Parliament in the last general election was costly but it was also educational.

‘Alisi Taumoepeau who was the first elected woman in the previous Government to become a minister recalled that a potential candidate to run for Parliament needs to know who you really are, what your role and responsibility is and what are visions to perform as a parliamentarian.

“It is difficult to adhere to your vision if you are do not know your role and responsibilities,” she said.

With regards to campaigning strategies the former Justice Minister said in reality she found campaigning during kava Tonga as an effective tool in winning people’s heart. However she thought it was necessary for women to undertake kava Tonga election campaign.

The Finance and National Planning Minister Dr. ‘Aisake Eke also spoke to the participants and shared his campaigning strategies. That includes running programmes on radio and television. He also admitted he was never a kava Tonga person but in his election campaign in 2010 he was adviced by his family to also approach men during kava Tonga party.

“My campaign involves talking to people and not bribing them I certainly believe it is the voter’s constitutional right to vote whoever they want to be in Parliament. I wanted them to cast their vote on their free will,” Hon. Dr. Eke explained”

On the other hand, the Hon. Minister of Police, Fire and Prisons and the Ministry Inland Revenue Siosifa Tu’utafaiva stated that talking to men at kava circle was part of his campaigning strategies. He finds this an easy approach since he is a member of various kava Tonga scholarship clubs.

He recalled the strategies adopted when appointed as former Chairperson of the Whole House Committee, Hon. Tu’utafaiva says it was quite challenging at first.

“I was under the impression that my colleagues from the Friendly Islands Democratic Party expected me to take their side during the debate. However when I was given the task I decided to lead the discussion neutrally and also adhered to the House’s Standing Orders. Following those rules had somehow made my job much more easier,” elaborates Hon. Minister of Police.

The Practice Parliament for Women’s orientation programme concludes today before the participants undertake debate and discussion in a real Parliament’s setting tomorrow until Friday, April 11th.